The shift to electric cars is assumed to be inherently linked with a costing surplus for the employer, due to the relatively higher catalogue value of electric cars[1]. Indeed, since higher catalogue values mean, ceteris paribus, higher lease amounts, higher corporate budgets are assumed to be required to enable a shift to an electrified fleet. However, as will become clear in this article, pre-tax lease amounts in the car policy are not a suitable proxy for the employer’s true costs of an electrification project. Although most fleet managers realize that total cost of ownership (TCO) approaches depict a much more realistic picture of the total future fleet expenditures, many car policy budgets are still using old budgeting methodologies based on pre-tax lease amounts.

In this blog, an overview was provided on how to calculate the TCO for corporate lease cars, both before (TCO1) and after taxation (TCO2). As an example, let us compare the TCO1 of a BMW 3 with a Tesla 3, in line with the models suggested in [1]. Publicly available lease price data from DirectLease are used in this example. Lease contract parameters are 25,000 annual kilometers, and 48 months duration.

We can see that the employer incurs less costs for the electric alternative: the internal combustion car is 7% more expensive when considering the total after-tax costs. Notice the opposite conclusion when comparing the vehicles via a before- or after-tax approach!

The example above illustrates the difference between pre-tax and after-tax budgeting conclusions. As mentioned, many BEV car policy budgets are still using based on pre-tax lease amounts. It means that employees, eligible to ordering a new car, determine whether a potential next car is within their car policy budget through comparing the budget cost -based on its lease amount- of the newly configured car, with the car policy budget limits.

Imagine the employee has a car policy budget of € 900, and a lease amount + non-recoverable VAT pre-tax budget methodology applies. The budget/car policy cost for the BMW 3 then amounts to € 870.56, and the budget cost of the Tesla 3 is € 1077.40. While the Tesla 3 results in less expenses for the employer, as was shown in the above table, the current budgeting methodology does not allow the employee to order the Tesla within the same budget as the BMW 3. Using pre-tax budgeting methodologies thus systematically overprices EVs in terms of budget/real cost. It can present an irrational obstacle to the adoption EV. Figure 1 visually presents the concept of budget bias in BEV car policy budgets. The budget costs for an EV and an ICE car are shown.

It is clear that: 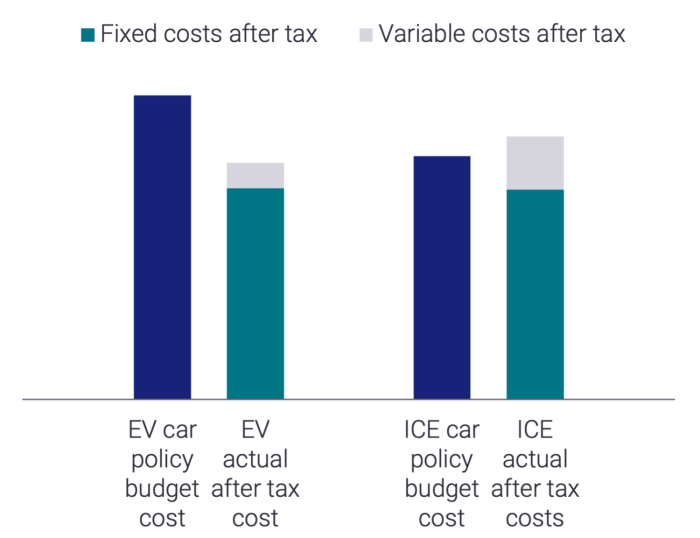 An interesting metric to measure budget bias in a car policy is to compare the total monthly cost after tax to the car policy cost. Preferably, the budget cost of the car in the car policy provides a good proxy of the real incurred costs for the employer: a TCO2/budget cost = 100% for all vehicles in the car policy would therefore be the ideal budgeting method. When looking at bulk-quoted vehicles, we can plot this metric (x-axis) versus the pre-tax budget cost (y-axis), as shown in Figure 2. In this section, a lease amount + non-recoverable VAT + CO2 contribution pre-tax budget methodology is used to demonstrate budget bias and the effect of upcoming fiscal changes.

Each dot on the figure represents a lease vehicle, and the color of the dots depicts the powertrain. Most of the vehicles have a budget cost between € 500- € 1000 per month. On the left of the figure, one can see the electric and plug-in hybrid vehicles, whereas on the right, the diesel and petrol, respectively, are to be found. This makes sense, since the x-axis, via the “gram formula” in the after-tax cost calculation, provides a proxy for the CO2 emissions. The width of the total point cloud gives an indication of the differential between the budget at the disposal of employees and the after-tax cost to the firm, dependent on the car that the budget is spent on. As an example, a car policy budget of €750 could be spent by an employee on an electric vehicle that incurs a cost only of 95% of €750 after tax to the employer, or on a petrol car that incurs 120% of €750 after tax to the employer. That means that the differential in effective cost to the company, in this example, is 25% of the budget price! 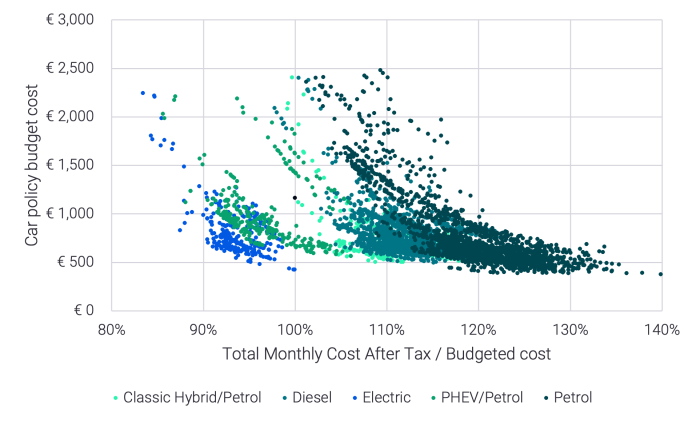 As discussed in this blog, upcoming fiscal measures aim at rendering the Belgian corporate fleets emission-less by 2030. By 2025, changing fiscal measures in Belgium will start affecting the budget bias in our example, since CO2 contributions are included in the budget definition. The increases in CO2 contribution will slightly reduce the budget bias against EVs with about 4-5%-points, since a growing denominator will bring the ICE vehicles closer to 100%. Also notice the general uptick in budgeted prices per non-EV vehicle, as it follows the hikes in CO2 contribution. Finally, we can clearly observe that PHEV cars start to shift to the thermal engines. For PHEVs two effects play, being the CO2 contribution uptick, as well as the decrease of deductibility for the fossil fuel consumption. 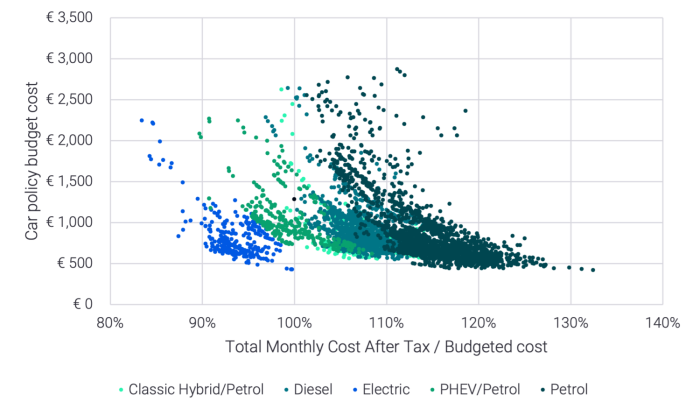 By 2028, the budgeted prices for non-EVs keep rising due to the increased CO2 contribution and non-deductibility of car costs. Due to more assimilated treatment of thermal engines, the bias within the ICE car group is reduced: plug-in hybrid vehicles are now situated with the other ICE cars. This is where the government’s objective of a binary distinction between ICE and electric vehicles becomes visible in an outspoken way. 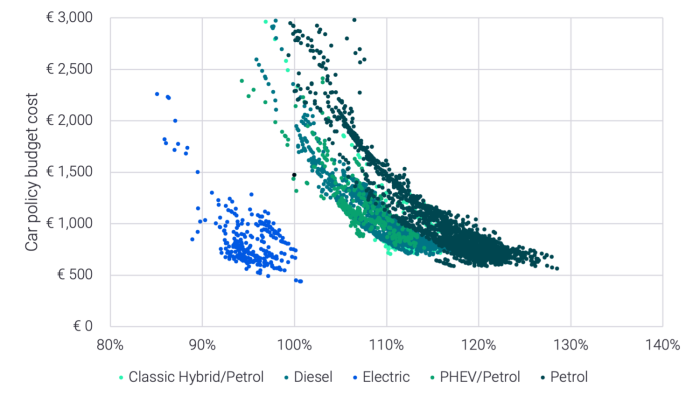 In the competition for talent, remuneration packages are offered to employees that provide as much value as possible for them, at the rate that a firm is willing to pay.

The current after-tax costs for company cars should reveal the willingness to pay for talent. Whether an employee chooses an EV should not affect our willingness to pay for talent. Yet, in most budgeting approaches, the choice of the car affects incurred costs to the company. This can present an irrational obstacle to the adoption of car types that are systematically overpriced in terms of budget/real cost. BEVs are such a category.

The budget provided to employees should be a good proxy for after-tax costs, but after-tax costs as a ratio of the required budget for BEVs are often systematically lower than for ICE cars. This implies that it is possible, as an employer, to increase the value of the provided BEV cars in the BEV car policy, without exceeding the after-tax costs that are incurred by ICE cars of the same budget.

For questions, more information, or help on implementing after-tax budgets to reduce budget bias in your car policy, do not hesitate to contact us at info@letitfleet.com.

[6] Corrections apply, in line with Tietge U., Díaz S., Mock P., Bandivadekar A., Dornoff J., Ligterink D., “FROM LABORATORY TO ROAD, A 2018 UPDATE OF OFFICIAL AND “REAL-WORLD” FUEL CONSUMPTION AND CO2 VALUES FOR PASSENGER CARS IN EUROPE”, January 2019

[8] The default flat rate of 35%, as accepted by fiscus, is used to determine the recoverable VAT.

Send us a message

Ready to get started? Get in touch!

Companies of all sizes trust let it fleet to understand existing conditions, plan and design better mobility policies, and support the implementation and execution of those. Contact us to find out how let it fleet can help you.

or Schedule a Free Meeting